Hanoi has been the capital of Vietnam for over 1,000 years and it shows, especially in the Old Quarter. Like the City’s beginnings, there are still some streets that primarily sell jewelry, fine art and crafts, silk, and now beer. The Old Quarter is noisy, crowded, and hazy from the traffic with its motorbikes, scooters, and tuk-tuks often laden with goods to be sold: fruits and vegetables, clothing, house plants, precarious boxes stacked high and wide (See all photos under the text).

Motorbikes are the family cars. We frequently saw up to 4 people on a motorbike, often with kids wedged between parents (this is also true in Cambodia, Thailand and Indonesia). Also an interesting trend we have seen in Asian countries are women, urban and rural, who are completely covered head to toe with special clothing to avoid sun, and the pointed Non La or palm leaf hats. I think I’d pass out from heat stroke by wearing all that, but I did get a Non La hat. And, in Singapore many women carry umbrellas for the sun. Pale skin is revered in many Asian countries, and skin cancer is a real concern, too.

One of the unique aspects of Hanoi is getting around on foot, negotiating traffic with virtually no traffic signs and rarely breaks in traffic. We watched and learned how to the cross streets. First we joined a few people who were crossing, and then on our own we did what they did, walked slowly into oncoming traffic which slowed down and went around us. It was a bit daunting but also rather exhilarating.

The food vendors set up shop on the narrow sidewalks and cook on creatively made carts with small plastic seats for patrons. It was explained to us how so many people can sell in Hanoi (I don’t think I can say that they are making a living). Shop space in Hanoi is limited and very costly. Informal and likely illegal agreements are made where, for example, a shop space will have a coffee vendor set up from 6-9am, then promptly shut down and then the clothing store will pull out its merchandise and sell from 9-5pm, and after it closes, another food or beverage shop will open from 6-10pm. Many of the street vendors come from the rural areas with goods to sell from their bicycles or carts.

Hanoi’s Old Quarter has a big festive Night Market on the weekends with pubs, drink and food vendors, and many shops, like jewelry vendors, that stay open late. During the day, we walked around the huge indoor markets (a couple of square blocks 2-3 stories high, some with clothes, shoes, household goods, souvenirs, and the other markets that sell an amazing array of foods, most of which we couldn’t identify. And, Vietnam makes a lot of nice clothing. We purchased a traditional water puppet sculpture and a painting by a well-known local artists at a small gallery.

The city really opens up with its dozen lakes. We also wondered around the impressive former French Quarter. In the early 1900’s, this area was under French control and called French Indochina. During those years, the French built extensively adding beautiful government buildings, palaces, and hotels in the classic French style, and planted big tree lined boulevards.

Gene and I really wanted to see the Vietnamese Women’s Museum, a big four story building where we learned so much about the critical roles that women continue to play here, even fighting during wartime. And, interestingly, although this is a communist country, religion (primarily Buddhism), animism, spirit worship and superstitious beliefs are strongly held and openly practiced. There is at least one alter in every Vietnamese home (we saw impressive alters at each of the homes we were at in rural Yen Duc). 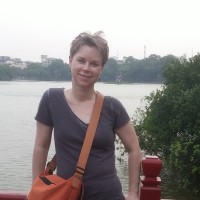 Food vendors setting up on sidewalk 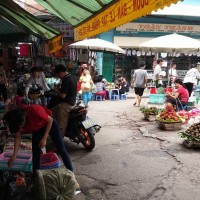 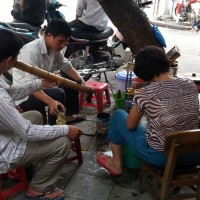 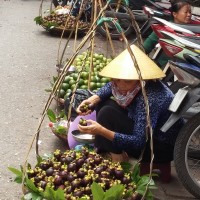 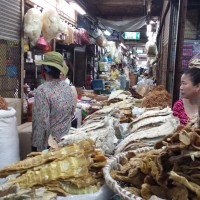 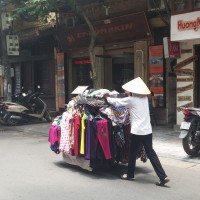 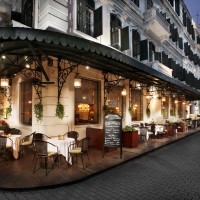 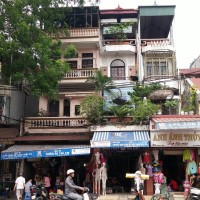 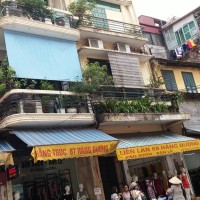 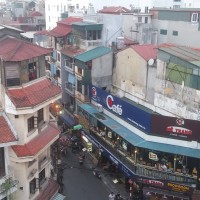 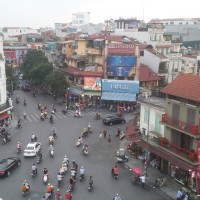 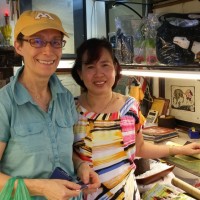 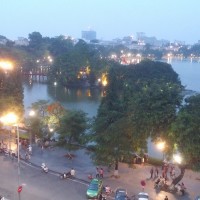 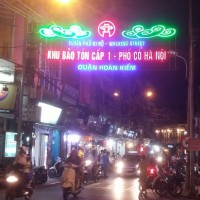 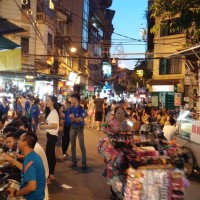 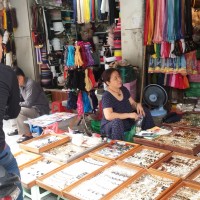 Store on street, motorbikes can drive up 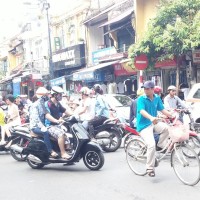