Ayutthaya Thailand and its Temples

My companions, Deb, Daniel, Patcharin, and I had a great adventure visiting Ayutthaya (Eye-U-Tie-Yah) and its many active temples and ruins. We hired a long boat and took a picturesque ride on the Chao Phraya river passing houses on stilts (in varying degrees of condition), bridges, boats, restaurants, and lots of temples, ancient and modern. Ayutthaya, which was once the largest city in the world with over a million people in 1700, is now about 82,000. (Photos are under text)

As with any adventure, not everything goes according to plan. We ventured out for dinner about 9pm and couldn’t find much open so we flagged down a tuk-tuk vehicle (in place of taxis) and got a ride to a central hawkers’ market that had many food vendors. When we finished our ten dishes(!) we went out to the street around 11pm and they were empty except for a few people riding bikes and motorcycles, and a number of dogs wondering around.

After standing on the street for a half hour we figured that the tuk-tuks were done for the night and had no other options. We began walking back along a large boulevard that was poorly lit with big busses parked along it, and too many packs of dogs for Deb’s and my comfort; we could see some of them and others we could hear howling. We thought we were quite a bit farther from our hotel than we were, but after about 20 minutes we arrived safe and almost sound. (Daniel and Patcharin, who live in North Thailand, weren’t too concerned, and Deb has a fear of dogs).

Ayutthaya was first established as the capital of Thailand in 1350 and its rein lasted until 1767. It was an absolute monarchy and its official religion has always been Buddhism.

This place was chosen for the capital because, “Throughout the centuries, the ideal location between China, India and the Malay Archipelago (Malaysia) made Ayutthaya the trading capital of Asia and even the world.

“After a lengthy siege, the city capitulated and was burned in 1767.  Ayutthaya’s art treasures, the libraries containing its literature, and the archives housing its historic records were almost totally destroyed, and the city was left in ruins.”

Many of the active religious sites throughout Ayutthaya are along the river which we visited by long boat; some if not all have monks in residence. And, some of the ancient sites seemed to be unharmed, while others were irreparably damaged from the attacks by the Burmese over centuries. These are sadly apparent from the many hundreds of beheaded Buddhas at several of the sites we visited. This city’s ancient temples form a UNESCO site. 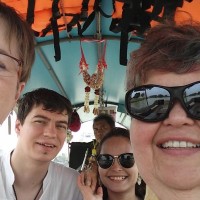 We are in a long boat with driver 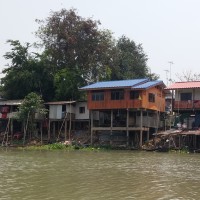 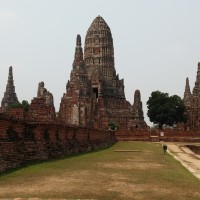 Temple compound from outside, on river 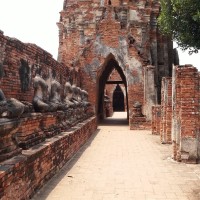 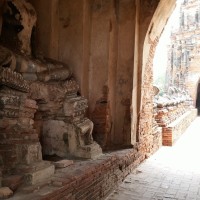 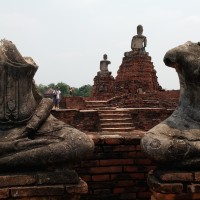 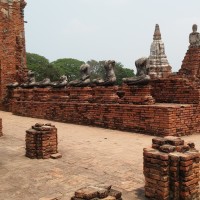 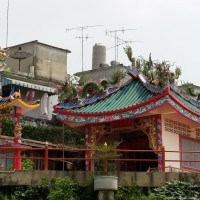 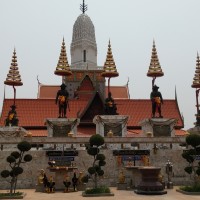 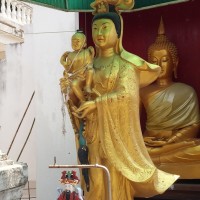 A shrine at one of the temple sites on the river 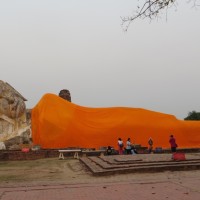 Reclining Buddha, the only sculpture at this place 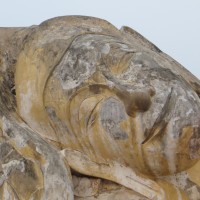 Close up of Reclining Buddha 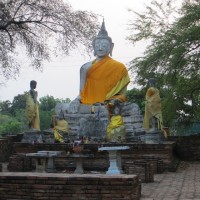 This appears to be the entire site; small sites not uncommon 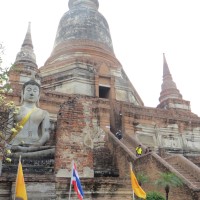 An ancient monastery and still active. Stairs to temple. 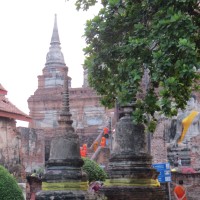 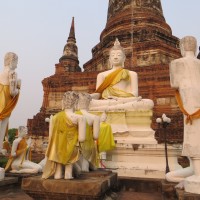 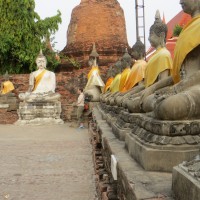 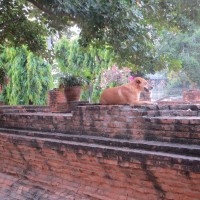 Dogs and cats cared for by monks 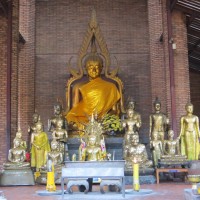 One of monastery’s temples. 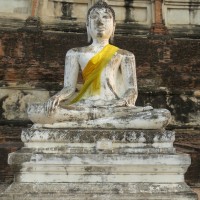 Large Buddha, at this site, they are draped 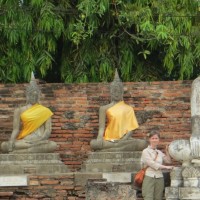 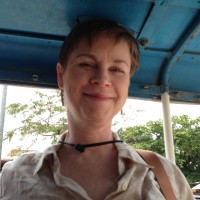 On our way in a Tuk-Tuk, 3 wheeled car